To appease your hunger, while waiting for the late Italian meal, you may want to try the Italian happy hour or aperitivo , a real tradition in Milan.

Though the precise rules differ from bar to bar, the general idea is that you order a drink at a slightly higher price than usual, after which you either get some (very tasty tapas like) snacks at you table, or (better still) you may serve yourself at a rich buffet at or near the counter.

The choice in Milan is endless but below you will find a few excellent addresses (click to open: 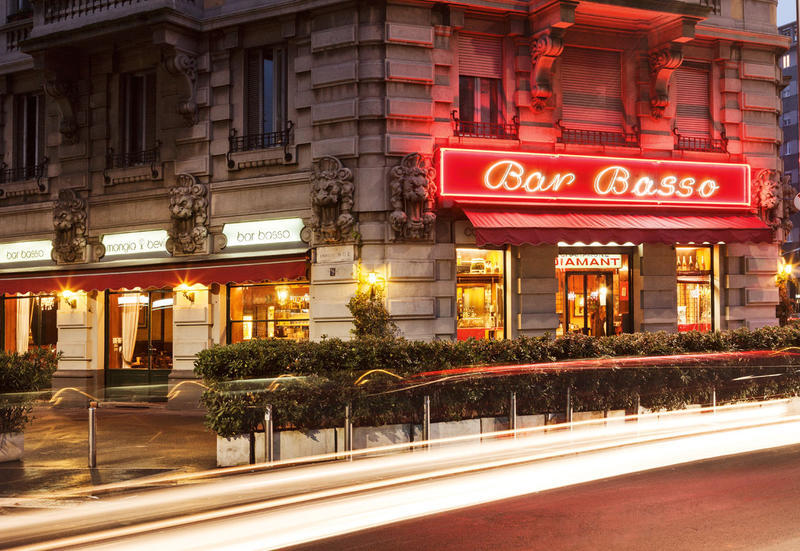 The cocktail inventors
This is a historic spot, over 50 years of age, as it is in this bar the the Milanese gusto for cocktails was created. The bar still offers a range of it's own inventions (over 1500) and classics. The bar is located east of Corso Buenos Aires, along Via Plinio.

The house special is the Negroni Sbagliato (Negroni the wrong way) made with 1/3 spumante (sparkling white wine, instead of gin, that's why it's 'wrong'), 1/3 Martini Rosso, 1/3 Campari. And then there is also the Mangia e bevi, invented 35 years ago, patented, with gelato, fresh fruit and liquor.

The owner tells about the story of the bar in this video (in English, he sounds a bit drunk, but that's only his accent). 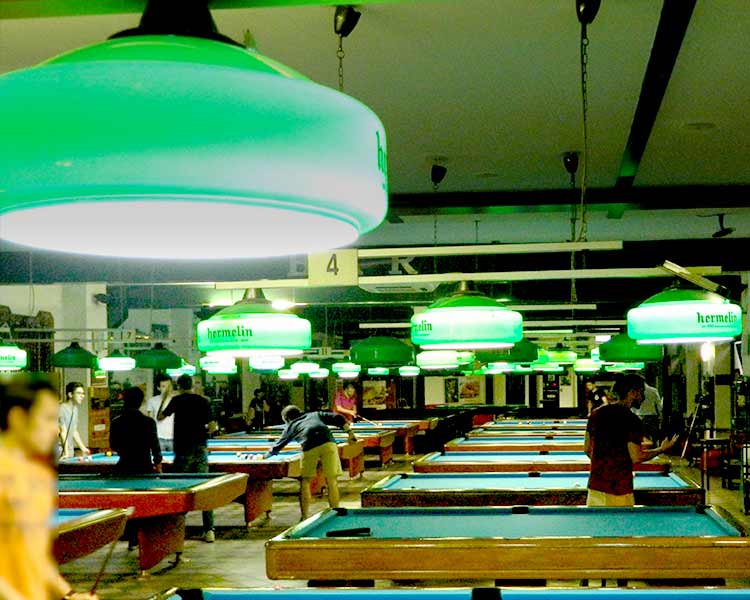 Billard & Beer
For those of you who cannot do without an occasional game of pool, this bar in the Navigli district is your spot.

Bar Euro Jolly is situated right before one of
the Seven restaurants.
Forget about the area of video games and walk to the back to get to a room of 25 pool tables. 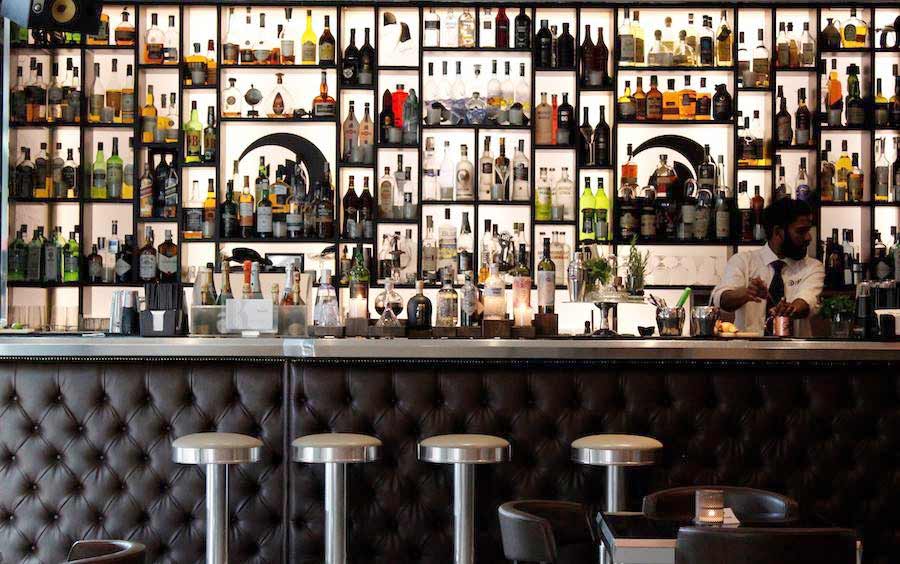 Italian Tapas
Among the wide choice of aperitivo bars in Milan, this one is a peculiarity as it serves a tapas kind of aperitivo food. Bar Frank is a small place, directly north of the Giardini Pubblici.

Every Thursday evening there is the Vintage Club with Radio105 classics; on Sunday evening Lounge & Deep music. 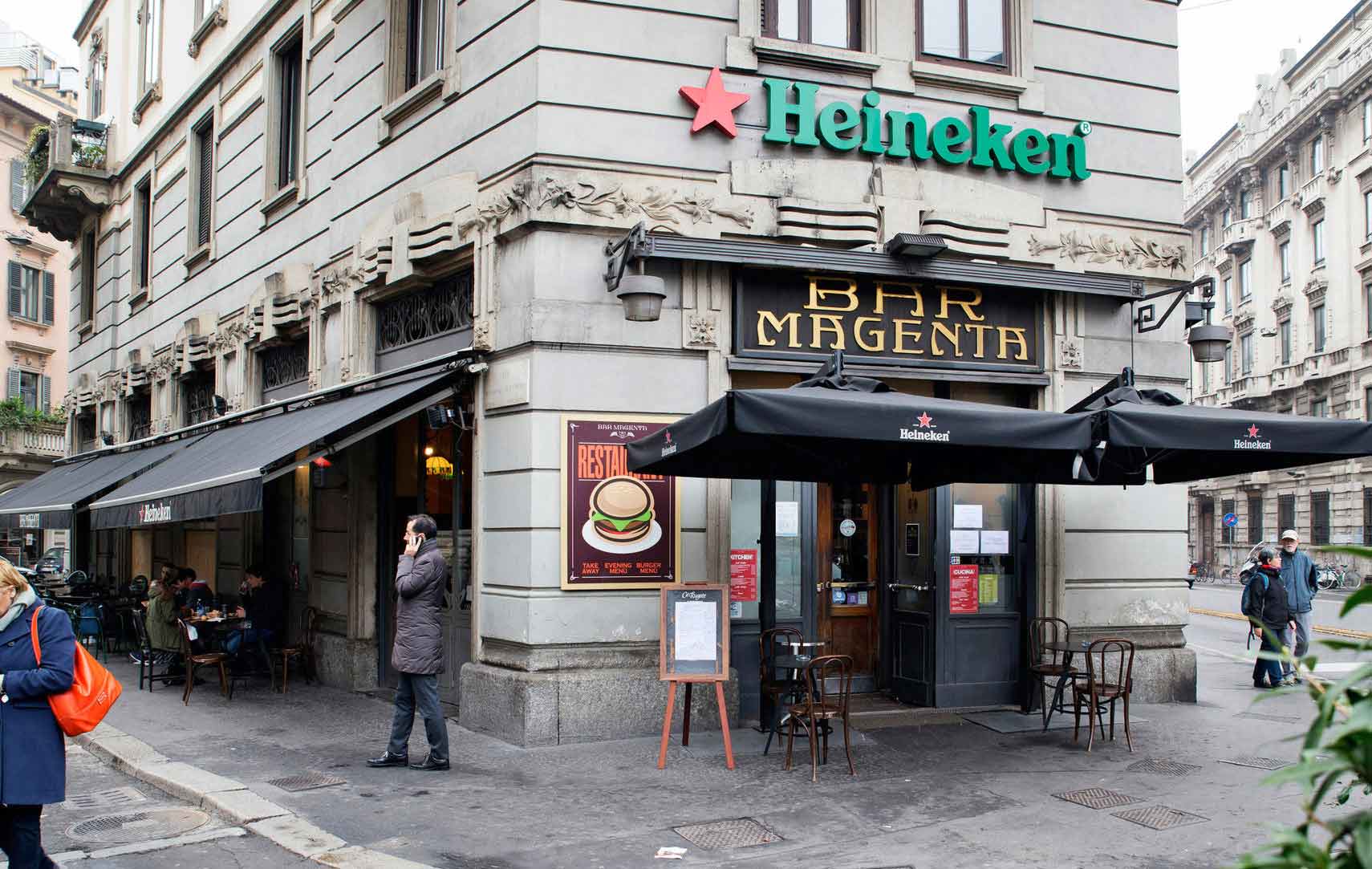 Listed in every guidebook on Milan, the Bar Magenta, is about the most famous bar of Milan. It is located south of Cadorna square, going south in the direction of the Sant'Ambrogio.

(Watch out for erroneous direction info: Google maps and the like will direct you completely elsewhere if you use the Via Carducci address without the first name Giosuè added to it!)

Bar Magenta exists for over a century and started the now very popular aperitivo phenomenon. It has recently been renovated and looks like a young lady again!

Specialty of the bar is it's wide choice of beers.
Magenta also offers the famous Negroni cocktail.

Pay first at the cashier.

A Design Bar
At a stone's throw from the Duomo lies the Straf bar, which is actually part of a design hotel of the same name. The happy hour is often enlivened by DJ set and live music, and starts from 6.

For actual news and upcoming events you may want to go to the website of the hotel and bar. 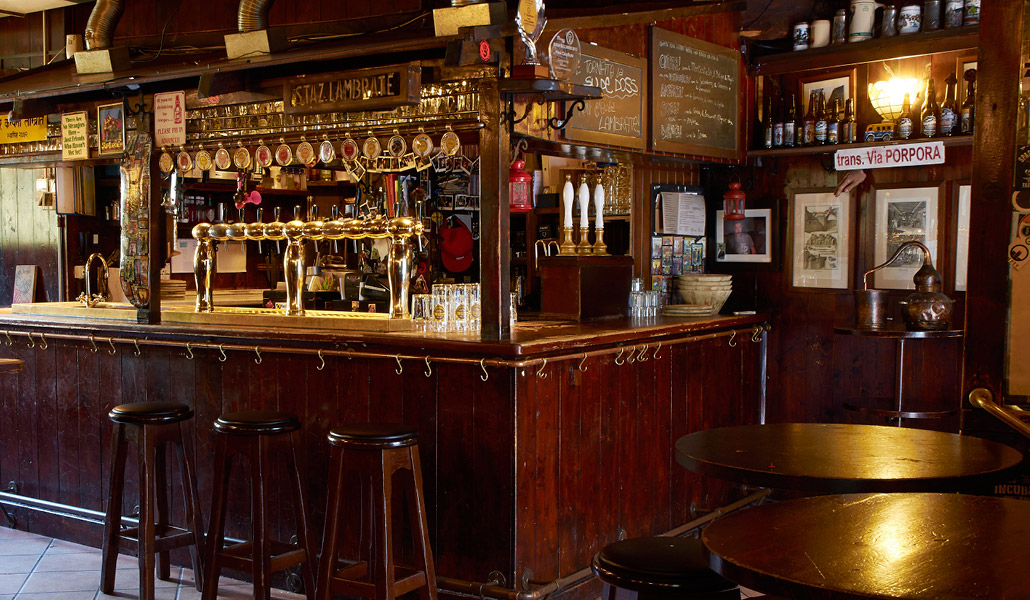 This brewer of craft beers, that contain no preservatives, started in 1996 and gradually extended its range to over 10 types of beer. The beer can be tasted at the bar at the brewery in the Lambrate district, in the direction of Parco Lambro and also at the bar in Via Golgi 60.

The bar offers a wide selection of beers and also an extensive happy hour, with many snacks and salads. The beers range from a light 5% blond or red to a heavy 8.5% dark ale.

The very informative website of the bar-brewery tells you about everything you always wanted to know, but never ...

The beers of this brewer can also be tasted at some other bars closer to city center. A full list is given on the Birrificio website. 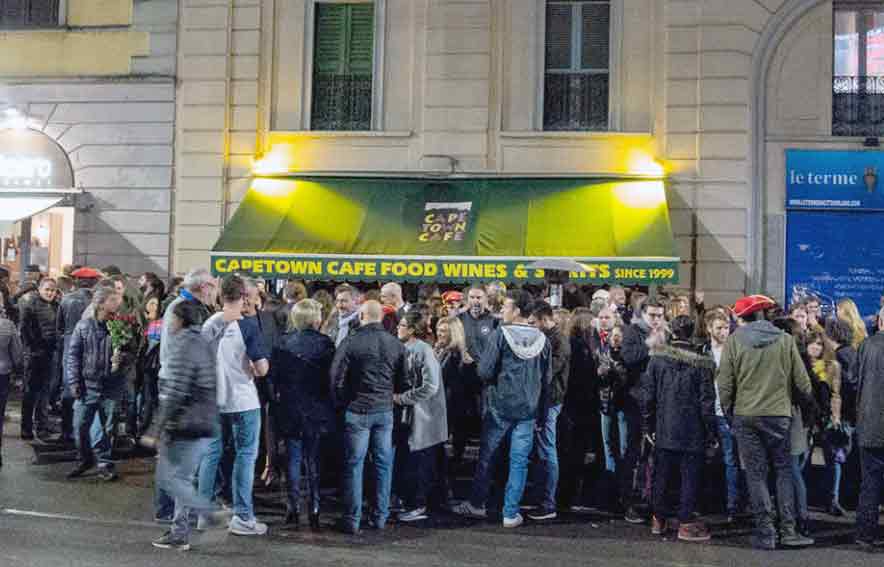 A creative chaos
This is a bar that tends to be overcrowded with the creative geniuses of Milan. People are usually overflowing into the street with drinks in their hands. It is located just outside city center, near Porta Genova. There is a rich aperitivo buffet from 6-9pm, but also a menu to choose from. 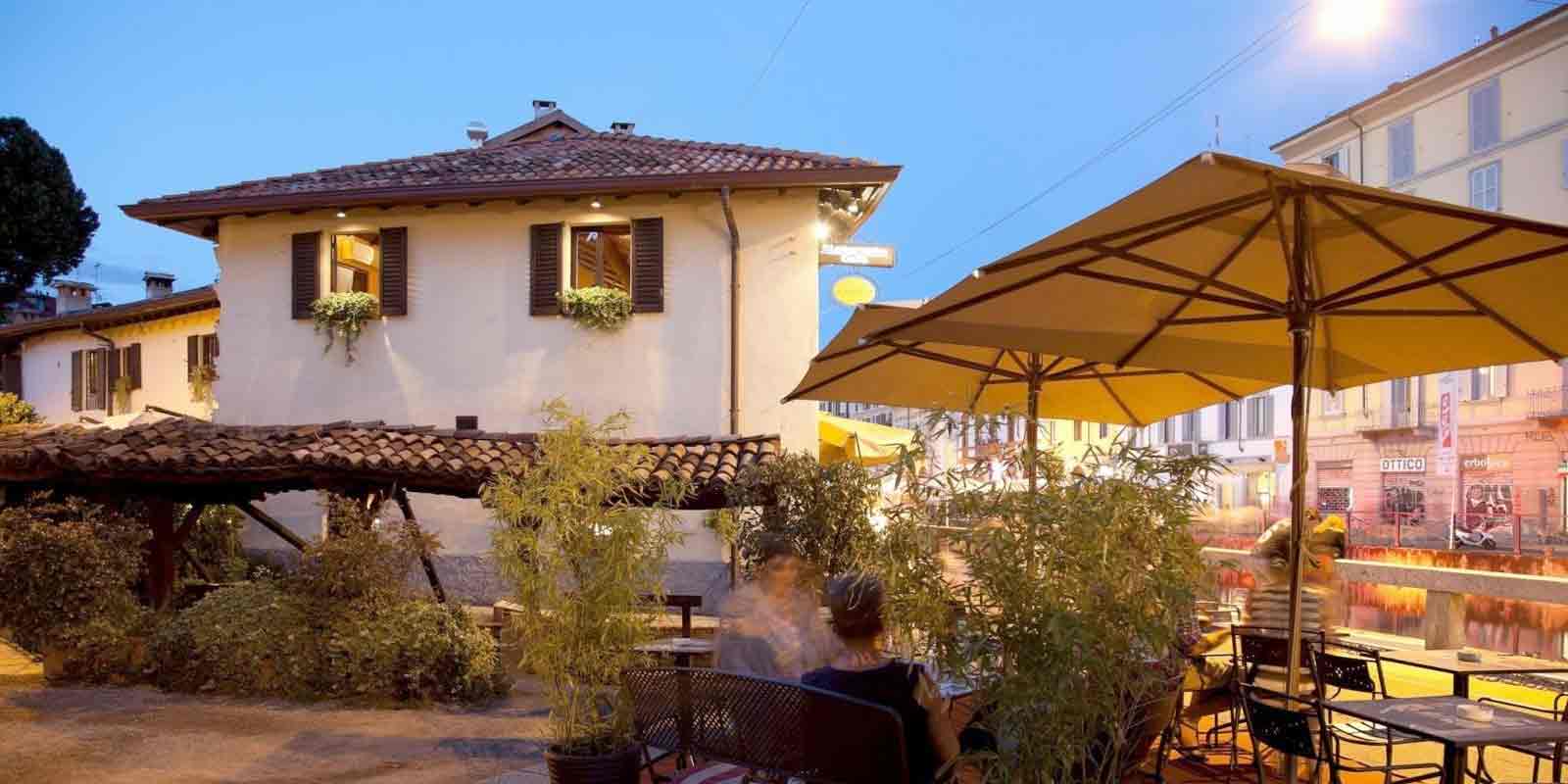 In the grocery shop

In the Navigli district in the former grocery shop (and mill) where the washerwomen (lavandai) used to buy their soap and brushes, you may now enjoy a meal at the Brellin restaurant (brelle=the stone on which the clothes were washed).

El Brellin offers a mix of tradition and modern: Milanese classics are re-elaborated to satisfy the international gourmet and modern tastes.

The restaurant also hosts a collection of 19/20th century board games.

There is also a café that is open 7 days a week. 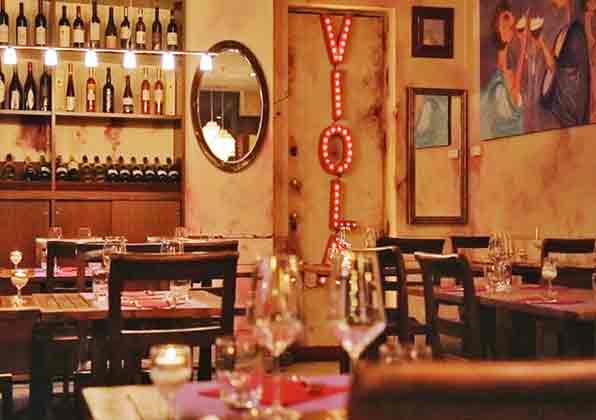 This little wine bar in the lively Navigli district offers more than over 250 types of wine. It offers a good choice of food as well and each month there is the possibility to try the wines of a different producer (and meet him as well): A Tavola con il Produttore. 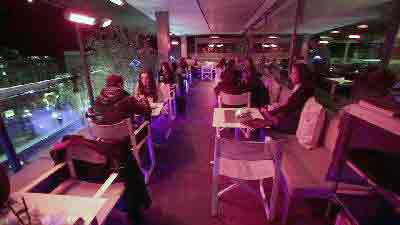 On the top floor of the COIN department store, on the square with the Cinque Giornate monument, is a modern classy aperitivo bar-restaurant called Globe. There is a terrace outside.

There are two types of happy hour, one of 10 and one of 15 euro, cocktail included.

There is live music on Friday and Saturday, on Sunday brunch is served (12-4).

The restaurant specializes in fish. Take the Globe dish with the catch from all over the world at 55 euro. 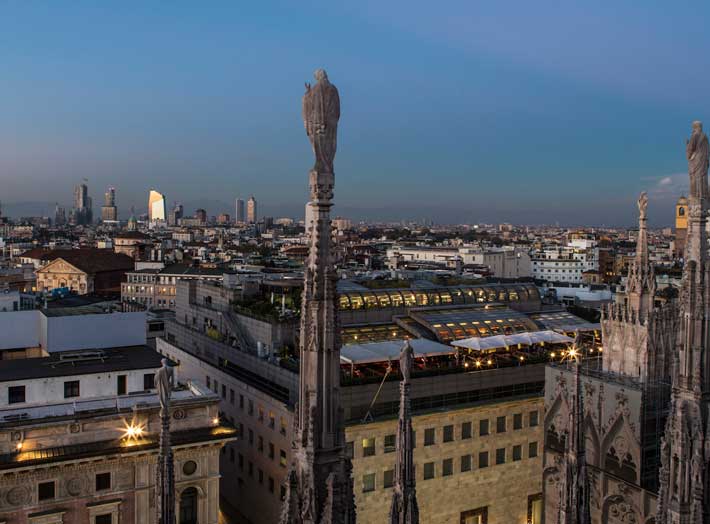 Food with a view on the Duomo

On the 7th floor of the La Rinascente department store, adjacent to the Duomo, you'll find what may be called a Food Hall. It is a collection of bars, a brunch restaurant, an enoteca, a market, an Italian food specialty shop and a terrace that faces the cathedral.

La Rinascente is almost always open and offers a very nice place to lounge after shopping and/or sightseeing.

Note: the space tends to be rather noisy and crowded, not recommended if you are looking for a tranquil spot. 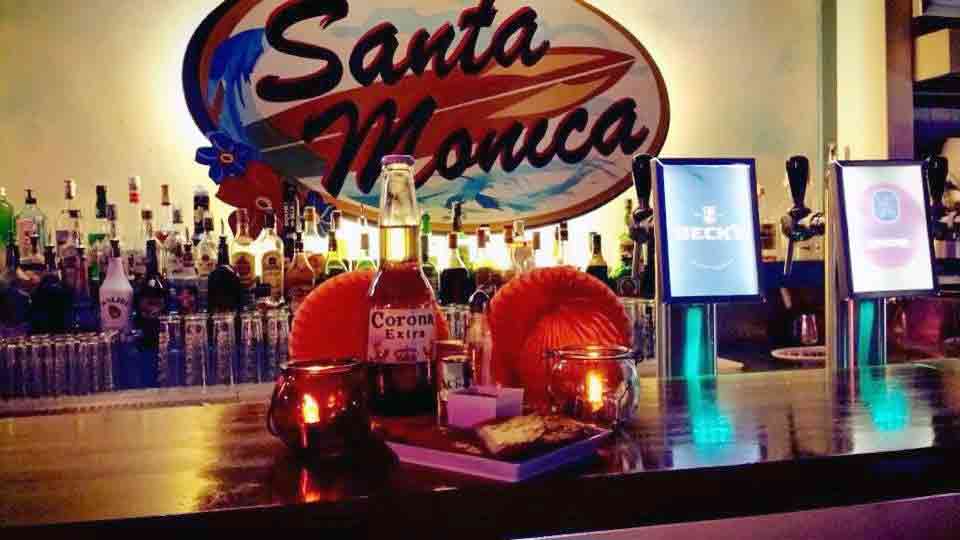 Burger behind the cathedral

If you are young (at heart) and in for a lot of fun (karaoke) right in city center, you may want to try this one out: Santa Monica, hamburger bar, aperitivo venue, soccer bar ecc.

The karaoke festivities take place on Friday and Saturday nights. Soccer matches on a maxi screen each weekend evening. 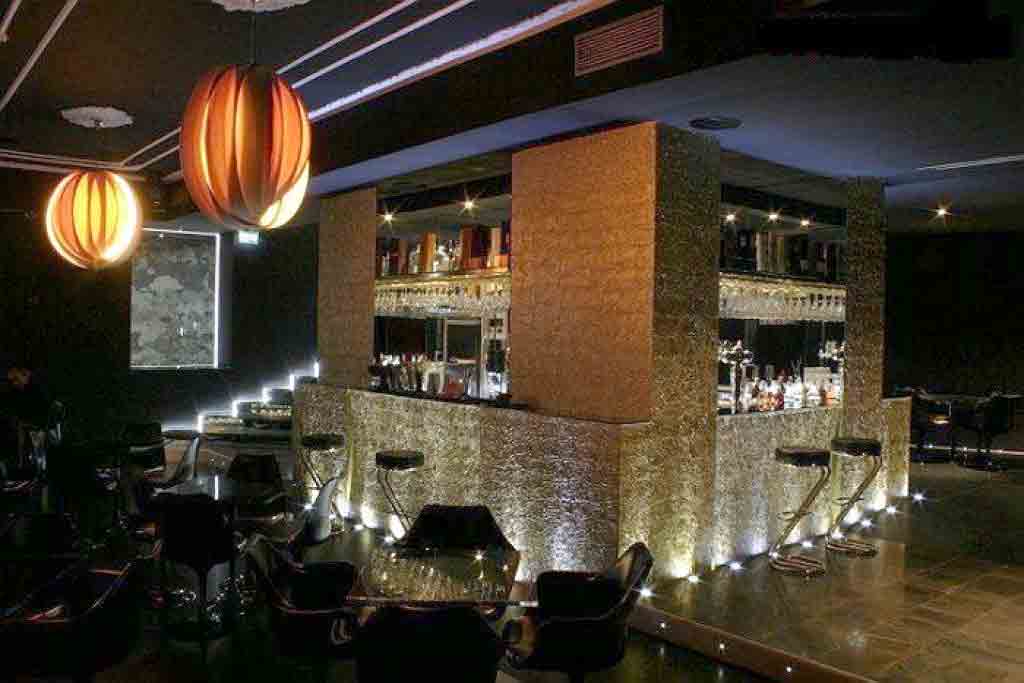 Right behind the Palazzo Reale, very close to the Duomo, you'll find the Santa Tecla Café, that has about 60 years of history of music and events to uphold. Giorgio Gaber, Luigi Tenco, Lucio Battisti, Adriano Celentano, Enzo Jannacci and others have performed here in their early years.

There are in fact two bars, one on each floor of the building. The bar is still a popular playing ground for new musical talents. There are often evenings of cabaret (Monday), jazz (Wednesday) and singer-songwriters (Sunday). 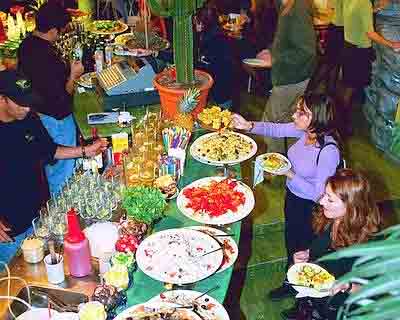 This café-bar is close to the Parco delle Basiliche in city center and is famous for its rich aperitivo buffet, on which you'll find: bruschette, gnocco fritto alla piacentina, affettati, pasta, crocchette, couscous, pasta salads, frittate and so on. 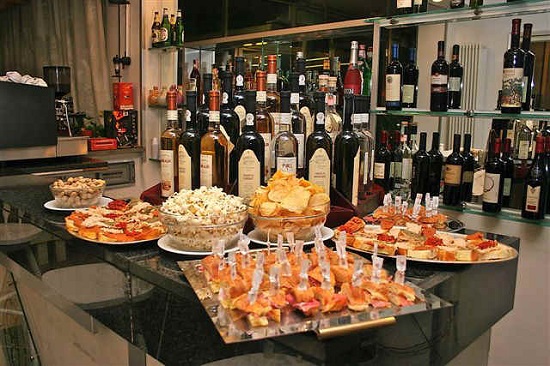 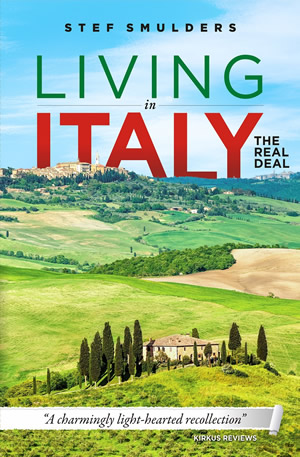